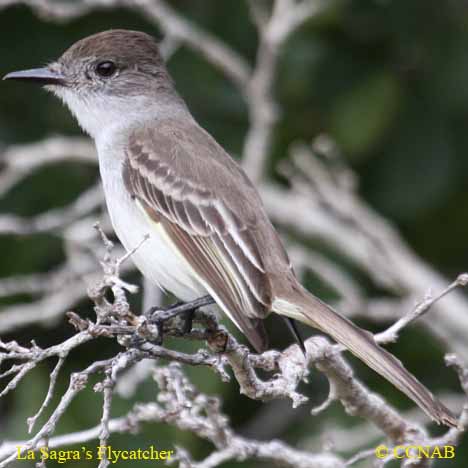 There are at least thirteen species of flycatchers in Cuba that are seen throughout the year, including the wood-pewees and phoebe. The largest concentration of these different types of birds is in the southern regions of the USA, Mexico, Central America and the Caribbean islands, where the climate and the habitat is more to their liking. In most cases, flycatchers have duller colours but there are some exceptions, including the spectacular looking Fork-tailed Flycatcher and the Scissor-tailed Flycatcher.

Insects are the main diet of these birds and they are known for their aerial acrobatic displays as they catch flying insects in the air. At times, they stop in mid-flight and hover, as they pick their prey from the leaves and branches. This type of manoeuvre is known as hawking. The flycatchers prefer high perches where they have the advantage of seeing larger areas as they seek their food. The flycatchers are some of the most difficult birds to identify because some species are so similar in size, colour and markings. Sometimes only hearing the bird's call can separate them from each other.