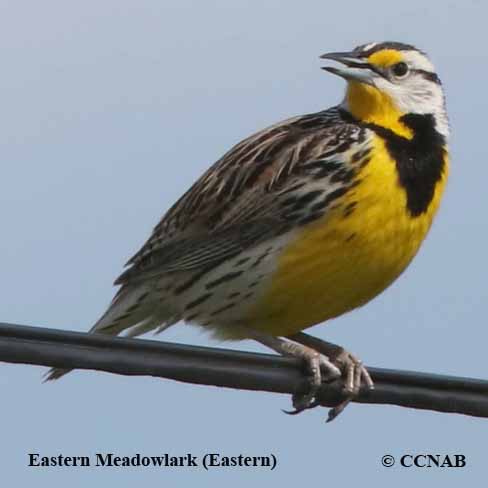 There is only one species of the meadowlarks found in Cuba. The Eastern Meadowlark is seen in North America throughout the spring and summer months. There are times these field birds are even seen into the late fall and into the early winter months went the temperatures are not too cold and there is still no snow in the fields. In Cuba, there is a sub-species of the Eastern Meadowlark, that does not migrate and can be seen throughout the year. There is also the possibility of seeing the northern migrating Eastern Meadowlark during the winter months. These two sub-species are very similar in their appearance and are very hard to tell them apart fron eachother.

Meadowlarks are the welcoming hosts of pastures and meadows. Their sweet melodies can be heard from a distance. The meadowlark can usually be seen perched on a wooden fence or up on a hydro line, where it can see over its territory. These hardy birds are one of the few who arrive on their northern nesting grounds early in the spring and are one of the last birds to leave in the fall.