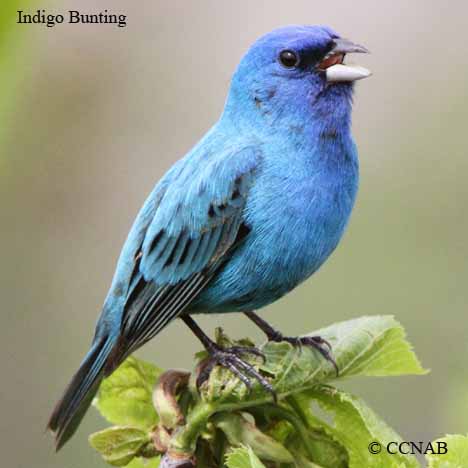 Distinctions: Breeding males have all blue plumage and an even darker blue head. The plumage appears black in colour when seen in direct sunlight. In non-breeding season, the male appears mostly brown with blue patches. The female, when in breeding plumage, shows lighter brown plumage, a streaked breast with a white throat. In non-breeding season, the female and the juvenile Indigo Buntings appear in light brown plumage overall.

Nesting: Three to four light blue eggs per clutch, often two broods per year. The Indigo Bunting nests on the ground and in smaller bushes close to the ground, hidden among the vegetation. Nest is constructed from grasses and leaves and are built in the shape of a small cup.

Distribution: In recent years, the number Indigo Buntings has been expanding. The contributing factor is that more older farmlands are being abandoned, the logging of forests and construction of highways and railways. This bunting is found from southern Manitoba to Nova Scotia, throughout the western central states to Florida. In the non-breeding months, it lives in southern Florida and southeastern Texas, Mexico, Central America and on the Caribbean islands.

Return back to Buntings

Return back to Blue Birds