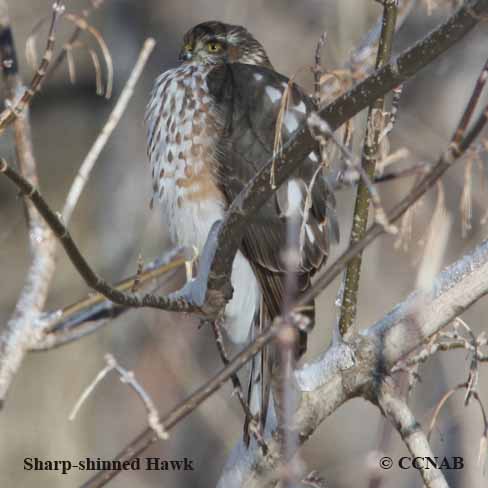 Species: The Sharp-shinned Hawk (Accipiter striatus) is the smallest member of the accipiter family. Known as a bird of the northern taiga, it is common as far north as the treelines. This grackle-sized hawk preys on mostly small birds, sometimes eating small animals, rodents and insects. Similar in appearance to the larger Cooper's Hawk (another member of the accipiter family), having the same bluish-grey back and orange-coloured barred breast.

Distinctions: The males and females are similar in appearance, females are larger than male birds. Adults have bluish-gray backs, orange-coloured barred breast, having red eyes. Appears to have a small head, which seems hidden by its wings when seen in flight. Wings are short and rounded, long square tail, showing at least three equal size bands, appears to have a center notch when folded. The juvenile is brown, with breast streaks and yellow eyes.

Voice: Repeated cries, what one would expect from a bird of prey, silent most times unless disturbed around its nest.

Nesting: two to three whitish-blue eggs, with brown spots, one brood per year. Usually builds its nest in a conifer and hunts in coniferous, deciduous or mixed forest.

The Sharp-shinned Hawk breeds throughout all the forests in Canada during the summer months. Lives and breeds in some western and eastern locations of the USA all year round. It is seen from Newfoundland and Labrador, west to Central British Columbia, south to southern California, all the way east to the southern tip of Florida, in the non-breeding season. This hawk is seen throughout the Caribbean islands and has been seen as a migrant in Cuba.