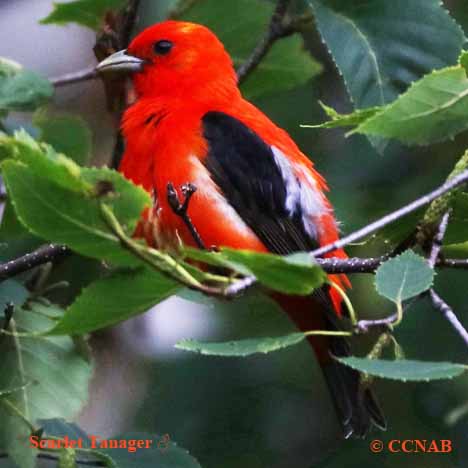 Species: The Scarlet Tanager (Piranga olivacea), and more so the male, is one of the most beautiful birds seen in North America. The male tanager is recognized by its bright red head and body, found throughout deciduous forests in the eastern regions of the continent. Their diet will include bees, other types of insects and they sometimes show up at birdfeeders looking for fatty suet.

Distinctions: Sexually dimorphic, the male has a red head and body with black wings and tail. Sometimes the male may be seen with red epaulettes. The female is green and yellow, as is the juvenile in its first year. In late August, the male will molt, losing its red plumage and change into a green and yellow plumage, although its wings and tail will remain black.

Voice: Repeated four note lyrics, usually sung from high in the crown of a tree.

The Scarlet Tanager is found throughout forested areas from Nova Scotia to north of the Great Lakes, as far as western Saskatchewan, down into southern Oklahoma, east to South Carolina and the Atlantic coast. Being neotropical, the tanager spends its winter months in South America and it has been seen as a migrant in Cuba.