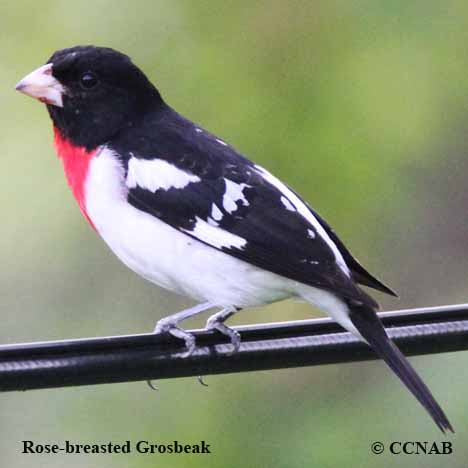 
Species: The Rose-breasted Grosbeak (Pheucticus ludovicianus), is an attractive large billed forest dwelling bird, found throughout most of Canada and into the eastern regions of the USA. It is usually seen at bird feeders in the springtime, where it is attracted to black-oiled sunflower seeds. Its diet consist of seeds, insects and fruit.

Distinctions: Sexually dimorphic, whereas the male in breeding plumage is seen with a black head, back, tail and wings, with white wingbars. It is so named because of its rose-coloured bib-type band on a white breast. The female is mainly brown overall in appearance, with brown streaking on a dull white breast. Juveniles are similar to the females, as are the males when seen in non-breeding plumage during the winter months.

Voice: Loud flute-like warbling lyrics, usually sung from high up in the crown of the treetops.

Nesting: Four to five purplish, white-spotted eggs. Builds its nest in a deciduous forest and forest edges. The Rose-breasted Grosbeak will have one to two broods per year.

The Rose-breasted Grosbeak is seen in the breeding season, from Nova Scotia to the borders of British Columbia and the North West Territories, into the central regions of the USA to the Atlantic coast. Migrates into Mexico, Central America and on to the Caribbean islands in late fall and returns back in late April and early May the following year. It has been seen as a migrant in Cuba.