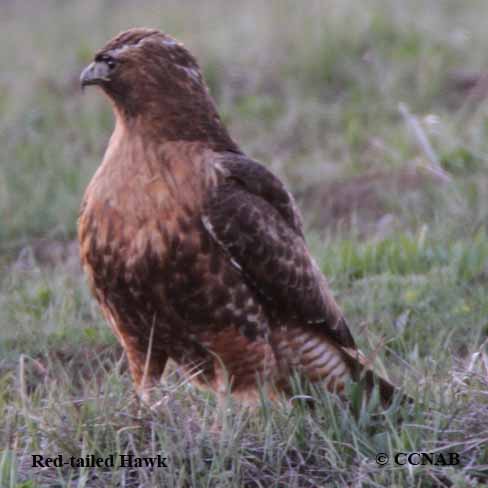 Life, Habitat and Pictures of the Red-tailed Hawk


Species: The Red-tailed Hawk (Buteo jamaicensis) is one of the largest members of Buteo family and the most common of the larger birds of prey. This hawk covers the largest territory in North America. Recognized in the eastern regions, by its dark brown mantle and usually a red-coloured tail. There are a number of sub-species. Better known among this group is the light coloured Krider's and the fully dark brown Harlan's, both sub-species are more likely to be seen in the western areas of the continent.

Distinctions: The eastern adults have dark brown backs and wings, brown heads, white to light brown breast with a streaked ban across their breast. If seen perched, from the back one can see a light coloured "V" from the shoulders to the tail. Western sub-species may be completely dark brown, with a dark red tail, or light coloured body, even with a shade of pink, with or without a red tail. Tails on most have light banding, with a narrower white band at tips.

Voice: Sharp extended cries, most often heard when the bird is in the air.

Nesting: Two to three white eggs with brown spots, one brood per year. Usually, builds large nest high in the crown of mature trees or on crevices of a cliff. Using branches, leaves and grasses as basic structures for the nest.

Distribution: Found along the edges of open forest, common sight over open fields, often seen perched in the lower section of a tree, watching for any movement below. It is seen from Newfoundland/Labrador to Alaska, down into southern California, to the tip of Florida and into southern Central America and on the Caribbean islands. It is a native bird of Cuba.