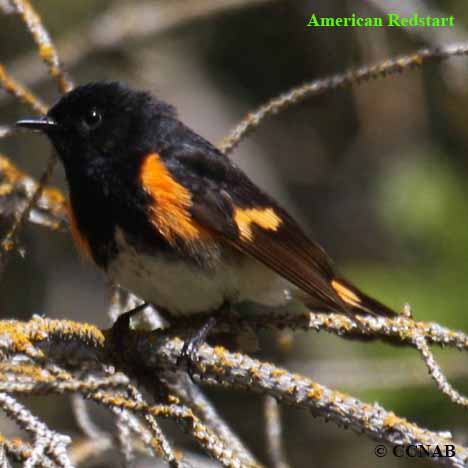 Species: The American Redstart (Setophaga ruticilla) is one of the more common warblers to be seen in North America. The very attractive male, who is quite active in singing throughout the day and most of the summer, can be seen flittering from branch to branch, exposing large orange areas on the side of its breast, its opened wings and flared tail feathers.

Distinctions: Sexually dimorphic, the male has large orange markings on its breast, wings and at the base of tail feathers, shiny black body with a white breast. Female has olive-coloured body, grey head, yellow feathers on wings, side of breast and at the base of tail feathers. Juvenile similar to female, with maybe a hint of black on side of breast and brown wings.

Voice: Loud songs consisting up to five or six notes, constant singing throughout the day. Always moving from branch to branch and tree to tree.

Nesting: Up to five eggs, pale white to light greenish with brown specks, one to two broods per year. Nest is usually located in the crotch of a sapling or base of tree. Prefers second growth forest with water nearby.

Distribution: Found in second growth forests or open wooded areas. Seen from Newfoundland/Labrador to the Yukon, down into Oregon, to the central USA states, into Texas to South Carolina. May migrate into the Florida tip and spends its winter months in southern Mexico and Central and South America. It is seen as a vagrant in Cuba.